Netherlands is going Full Dictator. Lawfare is in the works now to allow Mayors to kick Dutch citizens out of their homes to be replaced by alien invaders from the Middle East and Africa, or to force Dutch citizens to allow invaders to stay in their homes. Room and board.

According to Farmers and others I speak with, rapes and crimes have exploded since the invasion. Dutch children are hardly seen alone on streets even in villages. Parents are afraid to let the children out of their sight.

Yesterday, I asked a Dutchman where are the kids? Why are the streets mostly empty of children even in the villages? The Dutchman said kidnappers and rapists drive up in vans snatch the children and. He said this hardly hits the news and that rapes and murders happen every day.

This famous photograph is from the Dutch famine, the Hongerwinter 1944-45. Caused by Nazis. People would carry spoons around because they never knew when they might need the spoon to eat. I read similar about spoons during Mao’s famines. Hongerwinter ended when allies invaded and killed back the Nazis. That’s how you beat Nazis. They are an armed cult and must be killed or they feed you head first into ovens.

Famines are coming. Probably to Europe. And with these millions of invaders being given preference and carte blanche…this is classic Replacement Strategy such as that which Stalin used during the Holodomor famine in Ukraine. 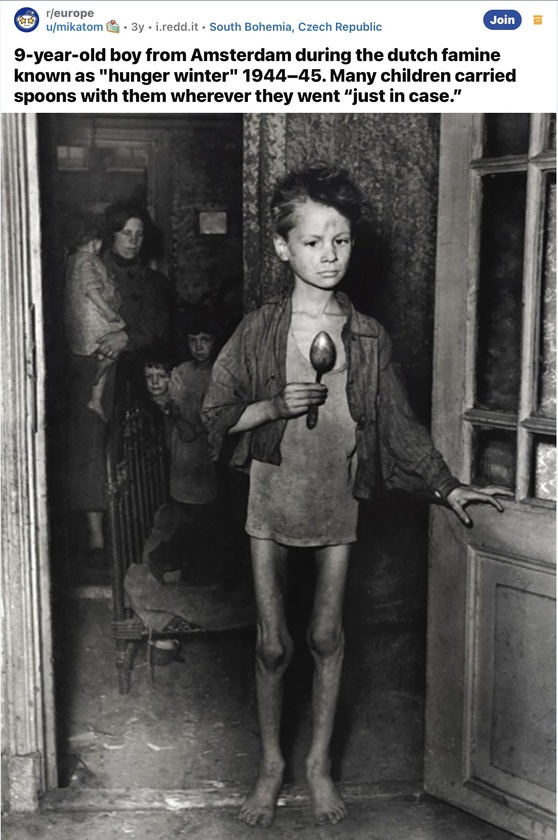 90
View All
21
Reply
Interested? Want to learn more about the community?
What else you may like…
Videos
Posts